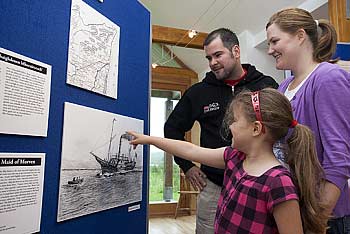 The exhibition of sketches bt JMW Turner was opened at Finlaggan Information Centre on Sunday 17th July by Mrs Patricia Halsall, the exhibition continues until September so there's plenty of opportunity to see it, if you haven't already done so. The drawings, copies of sketches in one of Turnerâ€™s notebooks, show Finlaggan and other places sketched by Turner on his way to Islay, â€œStaffa, Mull and allâ€ , as he put it in a letter to Sir Walter Scott. It is partly due to Patricia that this exhibition is taking place. She had a guest staying with her at Nerabus some years ago who was researching Turnerâ€™s visit to Islay on behalf of the Tate Gallery. As a result, she gave copies of two of Turnerâ€™s Finlaggan sketches to Catriona Bell in 2009. Catriona showed these to members of the Finlaggan Trust, who were reminded of a correspondence with researcher, Dr David Wallace-Hadrill, back in 1991. This gift of two pictures sparked the interest of Finlaggan member, Sir John Mactaggart, who put the Trust in contact with Tate Britain, and as a result Catriona encouraged the Trust committee to set up this exhibition. A group, ably led by Catriona, has brought this project to fruition, with full co-operation from the Tate.

The â€˜Ileachâ€™ visited Finlaggan for the exhibitionâ€™s opening, and found it fascinating and well presented. The mounted prints are mostly A4 sized enlargements of Turnerâ€™s sketches of Islay and other places in Argyll and the Highlands and Islands, made during Turnerâ€™s 1831 journey. Also, Finlaggan is displaying a slideshow of photos of Turnerâ€™s original sketchbooks. These photos of the originals show that the sketchbooks are A5 size, and the prints in Finlaggan have been enlarged to enable easier viewing of the details of the sketches. The sketches show draughtsmanship of the finest, with Turnerâ€™s few spare lines conveying a sense of the landscape which he observed and recorded. In notes on some of the sketches, Turner used a code of letters to record the landscapeâ€™s colours, as a reminder for possible later paintings. Continue reading....

Also, on Friday 22nd July an interesting and informative talk was given at Finlaggan by Thomas Ardill of Tate Britain about the Turner sketches at Finlaggan. Thomas began his talk with background to Turnerâ€™s Scottish journey, as Turner travelled often, making drawings for engravings to be used in various publications. The 1831 journey, which included Islay and Finlaggan, was made particularly to draw dramatic, â€˜romanticâ€™ landscapes for Walter Scottâ€™s Poetical Works. Turner had been invited by Scott to visit at Abbotsford near Galashiels in the Scottish Borders, then Scottâ€™s home, and from there Turner toured the Highlands and Islands, viewing and sketching landscapes and architectural features. Turner did not only consider â€˜matchingâ€™ his sketches to Scottâ€™s text, but used the journey to explore the terrain for scenes to be used in possible future paintings.

The very appreciative audience were encouraged by Thomas to ask questions after the talk, and many attending took the opportunity. Thomas explained that Turnerâ€™s sketches made on the 1831 trip were all done using graphite pencil, and the bound sketchbooks were good writing paper quality, which was commonly used for drawing at that time. All Turnerâ€™s sketchbooks were left to the nation by Turner in his will, with the provision that a Turner Gallery was to be created. This is the background to the present Turner Gallery, which is now in the Tate Britain National Collection in London. Some of Turnerâ€™s works can be seen online at www.tate.org.uk

This story was written by Susan Campbell and published with kind permission of the Ileach local newspaper. Pictures by Mark Unsworth of Islay Studios