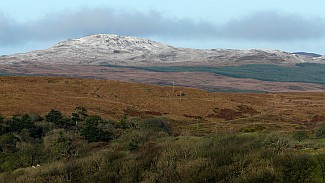 Since this is my first post of 2008 I would like to wish all the readers and their families a Happy New Year in good health and hopefully a visit to Islay, providing you're not a resident. Last year was a very successful year for the Islay Weblog and many new readers found their way to this blog which resulted in more than 150 registered users! Thanks everyone for signing up, for posting in the forum, sending in your pictures and for your contributions on the blog.

Teresa from islaywildscapes is on Islay at this very moment and she stays near Craigens Farm at Loch Gruinart. She sent me the picture (top-right) which she took last December the 29th showing Giur-Bheinn on north Islay covered with snow. According to Teresa the weather was very wild and they even had a very severe squall of ice hailstones when she walked at Ardnave, but she also mentioned that the wild weather didn't stop her from going out. She took over a thousand pictures so hopefully we can see some more of Islay in the winter. Thanks Teresa for your contribution.

Scotland has received its first serious snow cover this winter. Some areas saw almost 20cm of snow, specially in the Highlands, Borders and the east of Scotland. The met office issued a weather alert this afternoon and evening for more snow in Scotland (Highlands, Central and East) and Northern Ireland. This could mean that Islay might also see some snow later tonight as well and if it does there will be an update with pictures tomorrow morning so stay tuned!