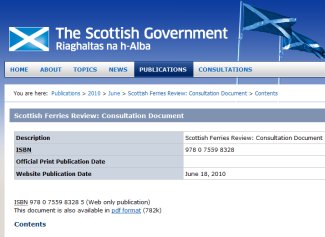 Tonight's post is perhaps not the most interesting one I've published for all the readers on the Islay Blog but eventually it could become a very important one, but that's not decided until later in the year.

Scotlandâ€™s ferry services play a key role in sustaining and enabling economic development in our fragile island and remote rural communities. At the time of the last census in 2001, there were 95 inhabited Scottish islands with a total population of almost 100,000 people. These numbers understate the substantial social, cultural and economic contributions our islands make to Scotland. Links to our islands need to be an integral part of Scotlandâ€™s transport network. We want to identify where changes and improvements to ferry services can support and enable the creation of dynamic and growing economies for our island and peninsular communities.

This is the first part of the introduction in the Scottish Ferries Review from Stewart Stevenson, Minister for Transport, Infrastructure and Climate Change. The Scottish Ferries Review consultation document was published on the website of the Scottish Government on the 18th of June. It's a very lengthy document, over 71 pages in PDF format, which I've browsed quickly. If you're not into reading lengthy reports I can recommend the executive summary, otherwise the PDF version is the easiest way to read it. Continue reading....

What's the purpose of this document? The report states: "The Ferries Review Consultation Document asks for your opinion about how ferry services could be delivered in the future, to inform us in the preparation of a Draft Ferries Plan to be consulted on later this year. It is the subject of public consultation which runs to 30 September 2010. Throughout the document there are key questions that we would like your opinion on. Your comments are requested by 30 September 2010." The purpose of the Scottish Ferries Review, as mentioned in the report, is as follows:

The Ferries Plan will ultimately make recommendations regarding: