Ileach Editor Calum Murray writes: If you are driving along the road on the Rhinns side of Loch Indaal you may miss the discreet sign that points you up the track towards "Kentraw Farmhouse Bed and Breakfast". I followed the post van up the track as it made its daily deliveries. Donald James MacPhee was already at the gate to greet me as I parked my car. He was as smartly dressed as ever, his clothes protected by a blue and white pin-striped butcher’s apron. This was in marked contrast to his usual attire. Any time I’ve seen him in the past he has usually been behind the wheel of a Land Rover wearing the tweed jacket and cap, country check shirt and tie that marked him out as a gamekeeper. Donald James was head keeper at Dunlossit for many years before his recent retirement.

If retirement is the right word. The very day after leaving his post he and his wife, Isobel, were welcoming their very first guests into their newly acquired business and home. Donald James took me for a look around the outside of the farmhouse. The building is much bigger than I had imagined on my way up. There is a huge outbuilding at one time it housed cattle in whose centre he has already installed a wooden shed to carry on with his many projects! The house itself, with its four guest bedrooms, reception room, sitting room, kitchen and dining room, has an adjoining wing that he and Isobel will have to themselves. The views from the front are quite stunning: there are clear views of Jura, Ireland, Colonsay, Islay’s higher hills and Loch Indaal. Donald James points a finger; we can even see his old house! Continue reading...

It must be quite different from his old job, I venture, involving himself in the hospitality industry. But he doesn’t agree. He tells me that there are many more similarities than you might think. His mum had been a housekeeper at Port Askaig when he was a boy and he remembers the pride she took in having everything shining and bright. She told him that service was all to do with standards and quality. And it was a lesson he learned well. He delivered both when he was a gamekeeper and would continue to do so for the guests at Kentraw Farmhouse. 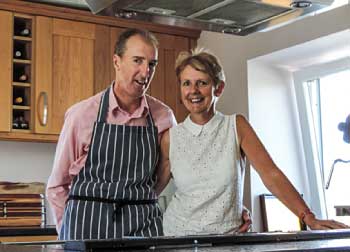 As if to emphasise this he stooped and pulled a tiny weed from the gravel on the drive and disposed of it. It will be a brave weed indeed who tries to invade Donald James’ patch.

Inside, Donald James and Isobel take me on the tour. I got the feeling that they hadn’t yet come to terms with how lucky they were. The house has been finished to a very high standard. It’s comfortable, uncluttered, opulent. I would be booking a room myself if I didn’t already live on the island.

We found our way to the kitchen-dining room for some coffee, pancakes and a blether. It turned out that Donald James had not always wanted to be a gamekeeper. He had planned to be a seaman when he left school. He had heard stories from older lads who had gone deep sea. They spoke of far-off places in a way that made them sound exciting and he wanted a share of the action. He even studied navigation at school.

In the meantime he would help up at the big house, and Duncan MacGregor would ask him to help with outdoor duties. Before he knew it he was feeding the pheasants, helping with the deer, cosseting and so on.

The men on the estate had a military background: Duncan MacGregor had been a Desert Rat and Donald Stewart had been a Royal Marine so the young Donald James, always on the look-out for adventure, decided that he might join the armed forces. When a young Port Ellen lad, George Hamilton was killed in Northern Ireland, Donald James’ fiercely protective mother put her foot down and his army career ended before it had started.

In the summer of ’74 Donald James was offered a full-time job. He took it when he was told that he would be allowed to drive the Land Rover a British built carrot if ever there was one. His duties at that time included being a kennel boy, then a pony man taking the shot deer down off the hill. Gradually he developed all the skills required of a beat keeper and game keeper and became head keeper in 1990. In the last 24 years he has had two under keepers and a trainee to whom he passed on his skills.

I suggested that though a sound knowledge of the land and the skills involved in hunting, shooting and fishing were of vital importance to a gamekeeper so were interpersonal skills. He entirely agreed. "First impressions are important," he said. "You only get one chance at it." He told me that a day on the hill can affect the way people are feeling. "You have to learn how to notice mood swings and how to react to them." He insisted that it was his job to ensure that the clients had an enjoyable time. 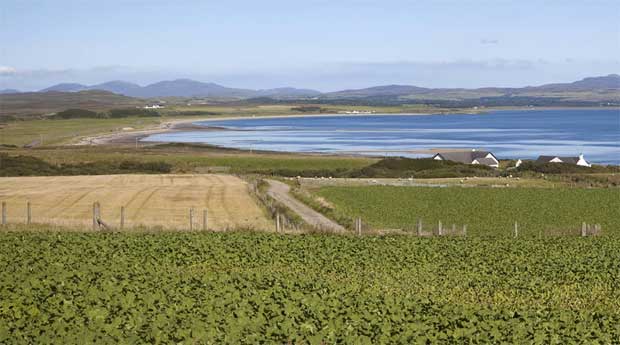 I wondered how skilful the various clients were and Donald James told me they could be first-timers or experts. An examination of their shooting kit would often give him a clue: new rifles would suggested a novice, while rifles with history pointed to someone who had been on the hill many times. "Mr Shroder was very good at briefing me," Donald James said. I thought that he must have on occasion had difficult clients. He admitted that some would want to shoot a deer that was not for the taking on a particular day. He would have to dissuade them. "You have to disarm with charm!’ he told me.

Sometimes he might have clients whose aim was terrible. He remembered an ex-SAS man who "couldn’t hit a barn door even if he had been swinging on the handle." He thought for a few seconds and added, "He might have been able to crawl up and slit a deer’s throat but he certainly couldn’t shoot it."

He thought that there were a few superficial changes over the years but that being a gamekeeper was essentially the same as it had always been. There were Argocats instead of ponies nowadays but rifles were heavier to carry because of silencers and bipods. And what were the most memorable aspects of your time at Dunlossit? I asked him. "I was feeling poorly after my expedition to the Himalayas," he said. "And Mr Shroder was at Heathrow to pick me up in his own plane and fly me home to Islay. That was special."

Donald James could cite many other highlights: his involvement with the Fly fishing Championships in 2003 and the friendships he developed while working on the RSPB cull, amongst others. And while he is not busying himself with Isobel to maintain standards and quality in their new venture, or attacking the odd weed lurking in the gravel, you might find him running on the hills that have been his life these past forty years.

Published with kind permission of the Ileach Newspaper