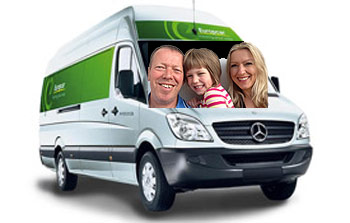 I would have never imagined in my wildest dreams that becoming a Friend of Laphroaig could have such consequences in my later life. It all started many years ago when I had my first Laphroaig dram and signed up as a friend of Laphroaig. It raised my interest in Islay and a few years later Manuela and I found ourselves on honeymoon on Islay, that was in 2004. Ever since that time we have visited the island over and over again and became to appreciate it more and more, and just as many times we imagined how it would be like to live on Islay. It seemed impossible in the early years but gradually, due to the nature of our work being both self-employed, we found out that living on Islay could very well be possible. I myself run the Islay Info website and Braveheart Webdesign & IT Services, and Manuela is a Personal Trainer and Nutritionist. When we visited the island in spring this year we finally decided to go for it. The circumstances were right and our daughter Annika still had a good age, five years old, to do this. We have been searching for a house ever since until something came up in Bowmore... We thought. Continue reading....

We had cancelled our current home, sold our furniture and our car and were ready to go! However, a little over a week before our move to Islay, the owners of the rental house in Bowmore gave us a nasty surprise by telling us we probably had to move out again in less than five months and perhaps even three. There you are, no way back and almost no way forward.... Panic and stress and no idea what to do next! After spending a day on the phone and sending many emails, a friend from the Netherlands came to the rescue and offered us his holiday home in Portnahaven for a period of 7 months. That was a big relief for us and I'm happy to let you know to that we will be making the move to Islay after all and we will hopefully arrive next week, on Wednesday the 8th of October, if all goes as planned. Annika has already been signed up for Port Charlotte Primary school and she is looking forward to the move as much as we do.

We will need to find a long term let from spring next year onwards but we are quite hopeful that once we are on the island it will be possible to find something more permanent. If you happen to know of anything, suitable for a family of three, please let us know. See you soon on Islay!