As we near the annual summer solstice on 21st June, Islayâ€™s long days are bright from very early morning until late evening. Even in the late night hours the northern horizon is lit by sunset light for much of the night. Itâ€™s such a lovely time of year, with almost no darkness at all. During a year, Earth takes just over 365 days to move around the Sun once and end up back in the same position. It might be thought that some parts of the year are hotter because Earth comes nearer to the Sun, but the reason for our seasons is that the Earth is not vertical from north to south, but is tilted.

The Solstices
The summer solstice usually occurs on 21 June, and this year itâ€™s on 21 June at 11:28 GMT, or 12:28 summer time. A central axis, like an imaginary rod, runs through the Earth from north to south poles, and this is tilted at an angle of 23.5 degrees rather than at right angles to the direction Earth travels. As Earth moves around the Sun during the year, the time that sunlight shines on each area of the planet varies in length. The summer and winter solstices mark the two farthest points in the Earthâ€™s orbit round the Sun. The extreme points in orbit are where the Earthâ€™s axis turns at its farthest tilt away from or towards the Sun. Continue reading....

The word â€˜solsticeâ€™ comes from the Latin solstitium, meaning â€˜Sun stands stillâ€™ because the apparent movement of the Sunâ€™s path towards north in summer or south in winter stops, before changing direction. Around 21st June, the sun will rise in the north-east and be above the horizon for 17 hours or more before setting in the north-west. In the north of Scotland at midsummer, the sun dips such a short distance below the horizon at midnight that it never gets fully dark at night. This dramatic variation in the length of the day from winter to summer was probably the reason for interest in the movements of the sun in prehistoric Scotland, as can be seen by the alignments of some standing stones and other early monuments. 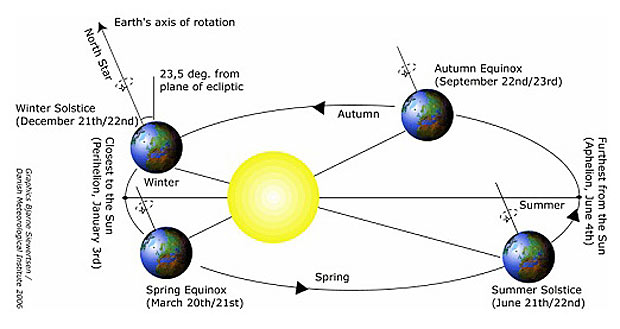 The image illustrates the different rising and setting positions of the sun. This has been exaggerated, as the sun is never directly overhead in Scotland. From its position at midwinter the rising sun moves further north day by day, until after six months it is seen at its extreme northerly rising position at midsummer. During the following six months the rising sun moves slowly south again, back to its southerly extreme for midwinter. These extreme positions are the solstices, the times of year when the sun appears to stand on the horizon at the same place.

With thanks to Susan Campbell, Ileach newspaper, the National Maritime Museum, the BBC and Stones of wonder for information for this article.