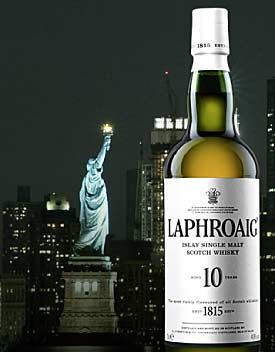 This years Laphroaig Live will come live from Brooklyn New York. You can watch John Campbell, Distillery Manager of Islay's Laphroaig Distillery, and the other panel members, online on Thursday 26th September 2013 at www.laphroaig.com/live

The show will start at 8pm in New York on an original Hudson River Barge of over 99 years old. John Campbell will be joined by Bourbon Ambassador Adam Harris, the renowned Michael Neff, Mixologist and Founder of Ward III and Kevin Sintumuang, Web Editor of GQ.

John wrote in an email to all the Friends of Laphroaig: "Weâ€™ll look first to our fastest growing expression Quarter Cask, matured in barrels similar to those used in the early days of Laphroaig. To contrast this weâ€™ll sample our latest expression, Laphroaig QA, which uses straight American oak, for a unique style of maturation. We will compare it to the classic American bourbon from our sister distillery, Makerâ€™s Mark."

"Finally, weâ€™ll taste the remarkable Cairdeas 2013, bottled for our Friends of Laphroaig. This unique expression used half Port Pipes for part of its maturation resulting in an extraordinary taste and colour. We couldnâ€™t visit the home of the cocktail without experiencing the huge renaissance of Laphroaig being used in the latest creations. Our bartender will be creating some of these exciting cocktails and the panel will get a chance to experience tasting Laphroaig in a very different way."

Below is the Youtube video of Laphroaig Live 2012, from Germany. Enjoy!