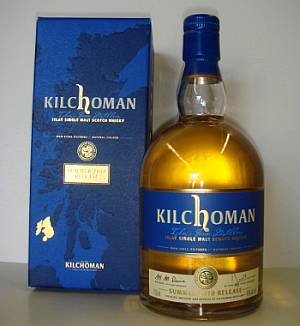 Good Islay news reached me this afternoon when John MacLellan sent me an email with the news that the Kilchoman Summer 2010 release won the â€œArtisan Whisky of the Yearâ€ at the Malt Advocate Whisky Awards. Great news for the folks over at Kilchoman, Islay's youngest malt whisky distillery.

A quote from John Hansell's blog: "The Artisan Whisky of the Year recognizes small production distillers making hand-crafted whisky, regardless of where they distill. Sometimes, artisan distillers peacefully coexist with larger, higher production distiMalt Advocate Whisky Awards â€œArtisan Whisky of the Yearâ€: Kilchoman (Summer 2010 Release). So it is with Kilchoman, located in a rural farmland setting on Scotlandâ€™s famous distilling island, Islay. Operational only since 2005, the owners of Kilchoman began bottling their peat smoke-infused whisky in small batches shortly after the whisky became legal at three years of age. We were blown away by it. The inaugural release (three years old, 46% ABV), occurred in the fall of 2009, but the first whisky exported to the United States was the Summer 2010 release. [....] If you like smoky whiskies, and you like them youthful, vibrant, and bracing, then Kilchoman is the whisky for you." Congratulations!!