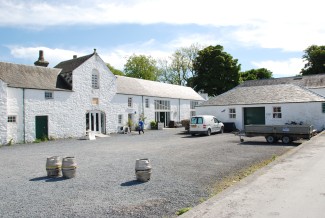 Do you remember what happened five years ago on Islay? What made the headlines in the Ileach Newspaper? Today the first of a series of posts that look back to the news on Islay five years ago as printed in the Ileach, volume 30, number 9, 8 March 2003. In this first episode an interesting article about the newly planned microbrewery in Islay House Square, which proved to be a very succesfull business we now all know as Islay Ales:

An interesting new enterprise is brewing in Islay House Square â€“ a microbrewery, Islay Ales, the brainchild of Paul and Ishbel Capper, Paul Hathaway and Walter Schobert. Planning permission has been granted, and building work is underway. The hope is that it will be up and running in time for the Islay Show in August. The ten square metre plant will create 90 gallons at a time, initially twice a week, but more if demand grows. The product will be a premium ale, hand bottled on the island, and finished along the lines of the well-known White Shield. In due course it is planned to open a visitor centre and a shop, and it is hoped that there will be a tie-in with the distilleries, to sell, for example, a bottle of ale packaged with a miniature of malt. The water will come from Loch Cam, though because it is intrinsically too soft, it will be 'Burtonised', a process designed to add minerals to replicate the hard water of Burton-on-Trent (hence the name), which is, of course, famous for its ales. Initially the ale, not yet named, will be sold on the island, but long-term it is intended to export to niche markets on the mainland. What a pleasure to have a good news story to write. The Ileach wishes the project well, and the editor will certainly attend the opening â€“ in every sense!