These are exciting times for the whisky Industry on Islay. With a new distillery recently being opened and others in the planning to be built, as well as the major reconstruction plans for some of the existing distilleries, I thought it would be a good idea to write about the upcoming changes as the (distillery) landscape on Islay is rapidly changing. 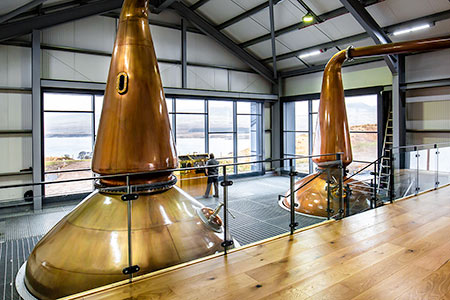 Let's start with the most exciting news as recently, early April, Islay's ninth distillery opened for the public. Ardnahoe Distillery is located a mile south of Bunnahabhain. I'm sure many visitors to Islay will take the opportunity and visit Islay's latest distillery and take a tour. The interior of the distillery is beautiful and the views are amazing. There is a large restaurant with nice views too so if you're not a whisky fan you still want to make the trip and have lunch or a drink.

Ardnahoe offers several tours; The "normal tour" named Spirit of Ardnahoe starts at 10am, 2pm and 3.30pm. There are also two special tours available. All tours can be booked online which is always recommended. More info on their website www.ardnahoedistillery.com, phone 01496 840777 or email shop@ardnahoedistillery.com. Read more.....

For Bruichladdich terroir is everything and in a couple of years they will be able to have a part of their whisky making process on Islay, from growing and malting the barley, the distilling and the maturing as more new warehouses are going to be built as well. In the not so far future you will be able to buy a bottle of Bruichladdich whisky which can be traced back to a specific farm and field on Islay knowing that every ingredient and the entire process is 100% Islay.

In April 2018 Diageo announced that they will be investing millions of pounds in the Scottish whisky tourism industry. Directly involved in these plans is Diageo owned Caol Ila distillery, north of Port Askaig. The investment at Caol Ila will provide in a new modern visitor centre, the plans of which were submitted to the council on the 14th of November.

The new visitor experience at Coal Ila will be created inside the distillery’s warehouse and will feature a new bar with views across the Sound of Islay. Plans will also include a new footbridge, allowing visitors to enter the site through the roof of the warehouse, along with new parking facilities. From what I've heard the work at Caol Ila will start in the next weeks and will take probably a couple of years to finish. 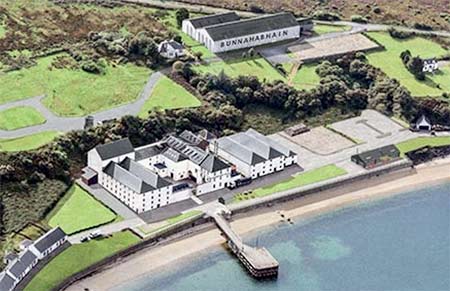 A three year refurbishment programme has begun at Bunnahabhain Distillery with a £10.5m investment in an extensive upgrade and refresh programme of the iconic distillery. A key focal point for the development programme is the creation of a new ‘brand home’ and visitor centre. This will also feature a café and retail space and will be positioned along the shoreline with stunning views overlooking Bunnahabhain Bay and the Sound of Islay. This is one of the first new buildings to be progressed and the plan is for the brand home to be ready to welcome visitors for the start of the 2020 season.

Other areas being improved at Bunnahabhain include the build of a new filling store, refurbishment of the production building and also the series of six cottages alongside the distillery, which will eventually be used for holiday accommodation.

The detailed plans for the resurrection of Port Ellen Distillery were presented at an event in Ramsay Hall in January of this year. The details of the project, which will see Port Ellen distillery returned to its former glory, were revealed during that night and will be submitted to the council.

Port Ellen will be brought back into production with a combination of two pairs of copper pot stills and two separate distillation regimes in an innovative combination of tradition and experimentation. The current buildings will be restored as integral parts of the revived distillery, with a new stillhouse created to house distillation.

Georgie Crawford, the newly appointed master distiller, ex Lagavulin, who is leading the Port Ellen project, said: "These plans are any whisky maker’s dream come true. To have the opportunity to recreate the original spirit character of Port Ellen distillery so we have new generations of that classic Islay peated malt is incredible, but then to combine that with the freedom to experiment with new variations is truly extraordinary.” 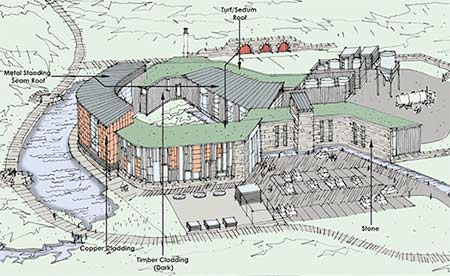 Although the name Farkin Distillery is not yet official, they might even choose a different one, I refer to the new distillery outside Port Ellen as Farkin Distillery as it will be located near Farkin Cottage. In December 2018 plans were submitted by Elixir Distillers to the council for "a single malt whisky distillery with the ability to produce up to 1.2 million litres of alcohol, as well as an experimental pilot plant for creating other types of whisky". In addition to barley, the distillery will be set up to handle different grain types, as well as produce a range of spirits including gin and rum, with its own facilities for growing botanicals.

If this plan comes to fruition the three distilleries path will soon see a fourth distillery between the village of Port Ellen and Laphroaig Distillery. It will have underground warehousing as well as a visitor centre.

What about the other distilleries?

As you can see for yourself there will be many millions spent on Islay to increase not only the number of distilleries but also to expand existing and build new facilities, as well as increase whisky production. Kilchoman has in recent years been busy with a new building for their maltings and are working on an upgrade of their visitor facilities. Ardbeg is currently working on doubling their production and Laphroaig has, allegedly, plans for a major reconstruction although I haven't been able to get a confirmation on this. The only distillery without any major investment plans seems to be Bowmore Distillery, the oldest one on the island, but that might change anytime soon!