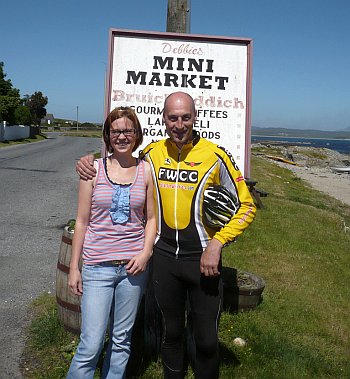 These are not my words but the words of brian palmer aka mr Islay cycling, aka mr washingmachinepost, aka Islay's Colnago authority etc etc. Fact is that brian has put Islay on the map as a cycling destination and it shows by the rising number of cyclists who are visiting Islay each year. A couple of years ago brian started to organise the "Ride of the Falling Rain" and this year, for the first time, he organised the Ardbeg Gourmet Ride. This is a similar ride as the Ride of the Falling Rain, with the inevitable stop at Debbies in Bruichladdich (Image right), but it ends with an evening of excellent food at Ardbeg and, in this particular case, a very special guest, Graeme Obree. Graeme is "without question, the finest athlete Scotland has ever produced", according to graemeobree.co.uk. The same website writes about Graeme:

"Graeme Obree's story is an inspirational one - a talented and driven amateur racing cyclist who, in the early 1990s, decided to try to break the toughest record in the books - cycling against the clock for an hour to see how far you could get. The previous "hour" record had been held for 9 years by the Italian Francesco Moser, but Obree's rival Chris Boardman announced plans to tackle the hour, yet Graeme had decided to try it first, just a week before Boardman's attempt. Graeme and his few assistants flew to Hamar in Norway, and he just failed in his first attempt to break the record. Everyone assumed that was that, including the officials who were there to measure the attempt. Graeme had the track booked for 24 hours, and said he would go again in the morning. This time round, he used his own home-built bike (dubbed "Old Faithful") and smashed the record, earning himself a place in the history books." Continue reading....

This great athlete happened to be on Islay last weekend to join the Ardbeg Gourmet Ride and made a huge impression as you can read from the following quote of brian's website in an article titled "l'incroyable monsieur obree": 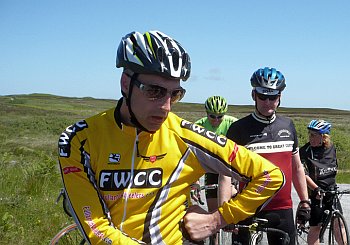 To seal the exclusivity of the day, the notion to import an after dinner speaker seemed a good one, and that speaker would almost certainly have to come from the world of cycling. Through the auspices of cyclevox, I was able to secure the services of unwitting washingmachinepost progenitor, hour record holder and 4,000m pursuit world champion, graeme obree. The start of an incredible day's cycling and food commenced with graeme's willingness not only to address us after a fine repast, but to join in the day's ride. saturday's ride verged on the indescribable, but i'll do my best. hardly anyone comes to islay for the weather, but the 19th bore a cloudless sky all day with just enough of a cooling breeze (non-residents called it a headwind) to prevent it becoming stifling. the ride almost over, it remained simply to return to our various homesteads or accommodation to shower, change and ready for the evening's face stuffing. As the evening wound down and we all nursed full stomachs and in some cases ever lightening heads, graeme recounted tales and anecdotes from his championship and record breaking years with a humility and complete lack of affectation that had even the cycling agnostic mrs washingmachinepost, spellbound, wrapt and laughing throughout. A true hero and deserving of every congratulatory testimonial he received from those in attendance.


For a full report visit brian's website, for more images of this fabulous day have a look here