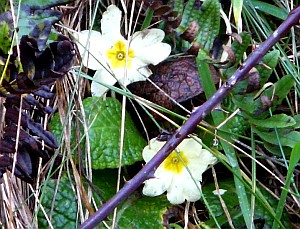 While winter storms batter the island and the 18:00 sailing from Port Ellen has been cancelled there is also good news to report. Teresa Morris from Islay wildscapes made a walk on new years day and spotted the first flowering primrose near Sanaigmore. The Primrose is usually early flowering, from February onwards, but this one is very early. Maybe due to climate change or just a warmer winter than usual? Nobody knows but it's a nice view!

In the meanwhile the Independant reports about the high winds last night and today: "Gale-force winds of more than 75mph buffeted parts of Scotland and Northern Ireland today, causing flooding and danger on the roads. Ferry services between Northern Ireland and Scotland were suspended last night because of the weather conditions, which reached 78mph in the Isle of Islay off the west coast of Scotland."