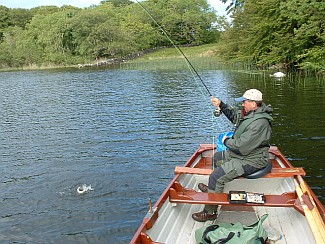 I thought this would be a nice follow up from yesterdays Wildlife and Birding report. This time not the wildlife you can spot flying in the air or walking over land, but the more invisible wildlife that sometimes jumps up from the water, can be very delicious when properly prepared and is a reason for some folks to visit Islay over and over again. I am talking about the Brown Trout, present in most of Islay's lochs. The brown trout is a medium sized fresh water fish, growing to 5 kg or more in some spots although in many smaller rivers and lochs a mature weight of 2 kg (4 lb) or less is common. They have an average length somewhere between 30 and 60 centimetres, that is between 12 inches and two feet in old money. The Brown Trout (picture bottom) can be found in many of Islay's lochs where Loch Gorm and Loch Ballygrant are best known with the fishermen.

Brian Turner (first picture) and his friends have been visiting Islay every year since 1995 and will do so this year as well. On Brian's website you will find pictures of Islay's landscape and (remote) lochs, the flies which they use to catch the fish and "Jim's notes", detailed reports of their fishing trips on Islay. Brian and his friends are not limiting themselves to the easy accessible lochs on Islay. So far they have caught the Brownies in 21 lochs spread all over the island and some of them in remote areas of Islay. To give you an idea of what makes these fishing trips so special I would like to add a quote from Jim's notes: Continue reading.....

Sunday 30 May - Arose at 7am - cooked the breakfast for 8am. We eat well at breakfast - benefit of having a butcher in the fishing party. This is usually the procedure for the whole week - each of us having our breakfast chores. Extremely sunny all day. Walked out to a hill loch called Loch Leathan an Sgorra (second picture) or Scor as it is referred. It is about a three mile walk in and the fishing was very hard with the bright hot sun. Trout came on for about one and a half hours, a good hatch of black flies brought them up and we caught about 20 trout. Later on the fishing became dour. Brian did best in the near bay by the little shelter hut. Keith stopped fishing probably the most sensible thing to do and decided to walk to the top of the Sgorra mountain on the south side of the loch. From the loch it looked high and we sat and watched as he reached the top. Keith took some really spectacular photos for the web site during his time at the top of Islay. Keith was our main photographer on the trip. We enjoyed a nice barbeque of fish and steak during the lull in fishing and thirsts were quenched from the clear loch water. After this we decided to carry on to another loch about a mile away called Loch beinn Uraraidh. It looked a good one to fish but we had no luck in the bright sunny conditions although we did lose one each. Perhaps another time we will return to this remote location - we know what to expect next time. With no change in the bright conditions we decided to head back to the car parked at the end of the peat road. Normally the walk back is in misty windy conditions but today the visibility was clear and perfect. We arrived back at the cottage about 7.30pm for a quick wash then down to the Lochside in Shore street for some well earned beer and supper. The best flies for the day were Black CDC and Black Pennel. The largest trout was about 1lb although there are bigger fish here - we have seen them!

I think it's fair to say that brown trout fishing can be very challenging and can take you to some of the remotest loch's of Islay. I also think that if you like fishing this is probably one of the best ways to do it, being so close to nature in such a wonderful environment.

Pictures in this article are courtesy of Brian Turner.